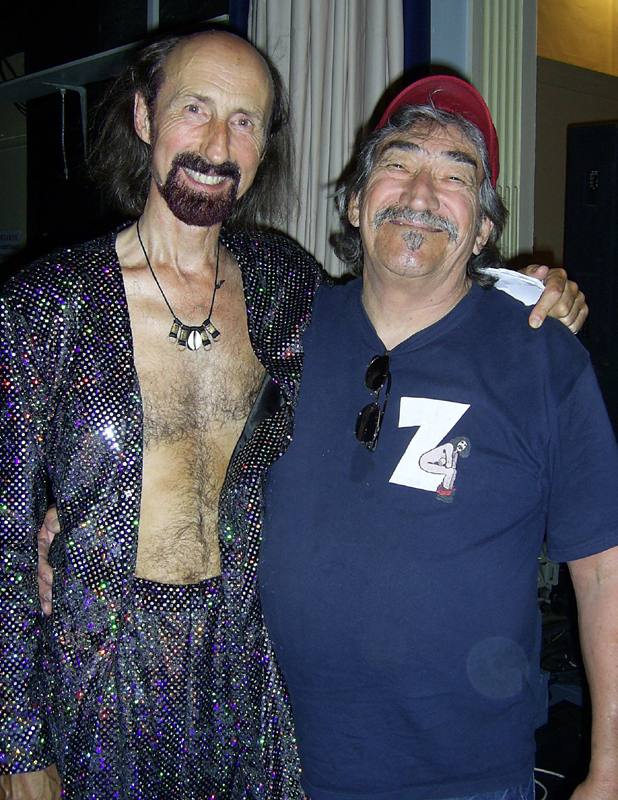 On the Miami Pop Festival 1968

My memories of the Miami Pop Festival are varied. I remember going for a ride on the back of Noel Redding's motorbike, also in Hendrix's helicopter. I saw Hendrix go in to collect his money and come out again with a sawn-off shotgun in his belly, being told " I think you will wait Mr. Hendrix - just like anyone else!"

My drummer thought he was Keith Moon and kicked his drum kit off the stage. Unfortunately this cut 20 minutes off the set proper. Vincent and I had to improvise. This was the final straw for Vincent, who told me "Either Drachen (the drummer) goes, or I do." In the end it was Drachen who left.

I had met Frank at one of our gigs in London. (There is somewhere a photo of us standing nose to nose in profile). I was wearing amongst other things on stage my granny's dress and this was something Frank introduced later to the Mothers.

After the festival, we went down to the hotel and jammed. As I recall, it was a strange straight audience but a star-studded band with, amongst others, Frank, Jimmy, Hendrix and myself. We did a version of ‘Fire’ which later surfaced on a bootleg in Russia. I remember at one time climbing on a table next to some go-go dancers and doing a Looney dance while Frank shouted "control yourself, Arthur!" Everyone apart from Frank was under the influence of quite a lot of alcohol and Keefe.

Jimmy was of course outrageous in the extreme and introduced me to many new cuss-words - a true master of this little praised art. It was through him that I became aware of just what it meant to be in "the underground." His sly and good-natured humour endeared him to me. I was very happy when I re-met him in Texas to find both of these traits had survived intact. [Arthur Brown]